I met Chris Miskiewicz at the MoCCA Festival in New York in early 2011. The Devil’s Concubine was set to be published in the US that year but wasn’t out yet. I carried a print-out of the book with me, as well as a sample of my upcoming book STILETTO. I was blown away by the response. I wasn’t used to that kind of praise, and for the first time, people seemed to really GET IT. It felt like I’d been in a box for ten years and now someone had finally taken the lid off. I didn’t know what to expect from the show but I certainly wasn’t looking for work.

I met Chris as he and Dean Haspiel were setting up a booth. Chris and I clicked immediately. He gave me a copy of his Everywhere! anthology booklet he had printed for the show and asked me if I would consider doing an episode. We exchanged numbers and continued to chat for almost an hour. I walked back to the booth this Danish cartoonist had set up in the corner of the con floor and started reading the booklet. I texted Chris 5 minutes after we parted ways: “I’m in.” For a guy who wasn’t looking for work, I was totally failing after just one day in the country.

We stayed in touch over the next months via e-mail and texts. Chris sent me a great script for Everywhere! episode, a heist story that was more or less written with my taste in mind. It was a great experience and Chris continued to bring up Thomas Alsop, a concept he had pitched me on the con floor that first time I met him. I still figured it had nothing to do with me, not ready to commit to anything that major and not sure how to go about it.

Later that year I heard of New York Comic Con for the first time and figured I would try to fly over for that. I’d already been to San Diego Comic Con and did a few signings on the West Coast. I reached out to Dean and asked if I could come sit at his studio for a week or so before or after the con and he said sure. I went and got to know both Chris and Dean a whole lot better.

Scripts and photo references for Thomas Alsop started filling up our Dropbox and we did a little teaser episode for Trip City called The Case of Dead Uncle. Google it, I’m sure it’s still out there. Again Chris was smart enough to lure me in with something short and doable rather than a full script for 8 issues.

Chris had already written the entire 8-issue arc before I even drew a single page. It was crucial to have the ending (and wow, what an ending!) in mind even as I was working on issue 1. Whether it would ever go anywhere was still in the wind, but when Chris spent his own money creating a live action trailer (viewable on the front page of thomasalsop.com) I was floored. It looked like a million bucks! This crazy New Yorker meant business and he clearly knew what he was doing.

In July of 2013 we pitched Thomas Alsop to BOOM! at SDCC. We’d bumped into a friend of Chris’ on the con floor who introduced us to Matt Gagnon and we chatted for like 20 minutes. Only after parting ways did we realize he was the editor in chief.

BOOM! eventually picked up the book and I started breaking down the script and drawing issue #2. We did hit a small snag when the publisher suddenly wanted to discuss a key point in the story revolving 9/11. If it had been a minor element we would have probably obliged to change it but since it was in line 2 of the pitch they bought and was a crucial focal point of the whole series, Chris and I stood our ground. We eventually agreed to a add little essays as back matter, making it clear for the readers that Chris was not just some douche exploiting a national disaster but was himself a New Yorker, born and bred. The book went forward and the controversy never happened. On the contrary, the respectful handling of 9/11 in the story seemed to land us an even more committed fan base and the book was dubbed Best Mini-Series of 2014 by USA Today. So even though BOOM! decided not to do a second series due to lack of commercial success, we still have a book we can be proud of out there. And who knows, maybe some day…

If I have any regrets in my career, it is not going to a US con sooner. Where the US has an actual comics industry, Denmark does not. I learned a lot from working with Chris, and found out I don’t necessarily have to be the one behind the wheel to enjoy the ride.

I’ve just finished my work on the monthly book from BOOM!, Thomas Alsop. This video is about some of the lessons I learned working on that book – hopefully there is some value in it for you too!

SDCC is so much more fun, when you have a book on the shelves!

My partner Chris Miskiewicz and I pitched Thomas Alsop to several publishers at SDCC 2013, and now only a year later, BOOM! Studios has published the two first issues of the series. Crazy times.

I got invited on two panels this year, both the Breaking Into Comics Right Now panel hosted by BOOM! and the Uniting the Worldwide #makecomics Community panel, hosted by my friends over at Making Comics (In case you missed the podcast interview they did with me, click here) starring Mark Waid, Jim Zub, Christy Blanch, Rachel Beck and Andy Schmidt. The talk was recorded and will probably go online soon.

I could tell you stories… But most of them are unrelated to the process of making comics, which is what this site is about. So I’ll just share a few quick things I learned:

The next few weeks I’ll be working out of Periscope Studios in Portland, Oregon, making new contacts and slow progress on the next issue of Thomas Alsop. Stay tuned…

Another look into the my process as I sketch a page of Thomas Alsop (out now from BOOM! Studios).

For more on Thomas Alsop go to http://thomasalsop.com/. 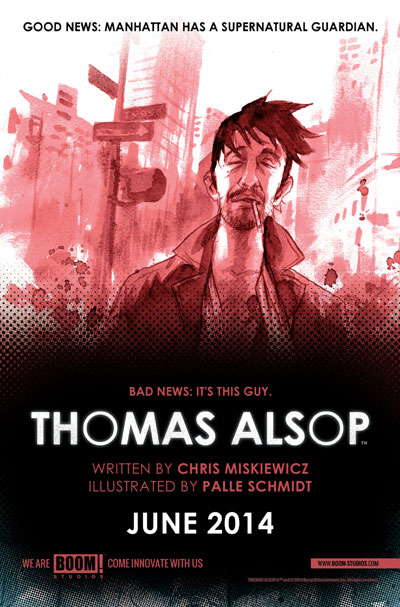 A timelipse vid of me “inking” a page of the upcoming book Thomas Alsop from BOOM! Studios.