In the year 2000 my friend Malik Hyltoft and I published FUSION the roleplaying game, the first two books from a major Danish publisher and a third was self-published. This was not just a niche product, but a niche within a niche.

I’m super proud of what we put out there, but I found myself wanting to do something something a non-roleplayer could pick up and enjoy. But at the same time, I knew I had something of a fan base in the RPG underground. What to do?

I think it was at some convention a guy showed me a White Wolf comic, based on the Werewolf game, and encouraged me to do something similar with FUSION. I completely dismissed the idea (because I’m an idiot that way). And then changed my mind less than 24 hours later.

The plot for Hard Evidence (in Danish “Skyggen af bevis”) came from a roleplaying game session. Well, two actually. My friend Thomas Bjerregaard came up with the story of a man who seemingly murdered his wife, and a sinister conspiracy beneath it all. First time around, the setting was America in the 1950’s and the investigators FBI agents. I re-hashed the plot for our FUSION campaign, the setting now a near-future Copenhagen and private investigators on the case.

We took turns as game masters in our campaign, like different directors on a tv-show. My character, ex-con Hauge, wasn’t in the session as it played out, but took the stage for the graphic novel. I enjoyed playing this guy so much, I thought he could use his own show. I toned down his thick-headed personality and made him a bit more articulate for the graphic novel. I wanted the dialogue to be zinging and tough, like Raymond Chandler at his best.

In a way, this project was a stepping stone for me. It got me back into comics, when I thought it too hard. The Devil’s Concubine was scripted and thumbnailed and just laid there, like a mountain waiting to be climbed. Hard evidence seemed like a less daunting task. Drawing it got me back into shape and rebuilt my confidence. The story originally ran as a weekly web comic on the FUSION website, thus forcing me get the damn pages done in time. I can highly recommend this method. Only downside is that everyone has read the book before it comes out. I coerced a few of my peers into doing art for a pin-up gallery in the back, so byers would get something new for their money.

Sometimes it’s a good idea to do a smaller project, almost like a throw-away thing rather than trying to tackle the most ambitious thing you can think of. 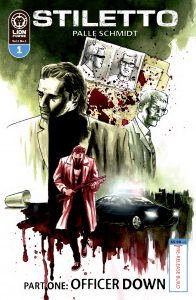 When my book The Devil’s Concubine came out from IDW in 2011 I was obviously super excited. Having a book out in the US was a decade-long dream of mine and now it was finally happening!

All fired up from going to Comic Con and doing signings in San Francisco and LA, I could not wait to present the follow-up to my editor. STILETTO was/is in my mind a much better book, more weighty in subject matter and more solid in the artwork. I really poured my heart and soul into it.

And they turned it down.

You hear a lot about “breaking in” to the US comics scene. Well, I thought I was in and it turned out it was a revolving door!

In the years after I always carried a copy of the Danish graphic novel (a beautiful hardcover edition) with me everywhere I went. I’ve shown it to editors at restaurants, in bars and at shows both in the US, Canada, France and Germany – never finding a home for it. Frustrating when you know you have a great book and for whatever reason no publisher picks it up. I really want people to be able to read STILETTO, regardless of their nationality.

STILETTO issue #1: Officer Down is out today from Lion Forge and you should be able to order it through your local comics store.

Here’s what the editor, Greg Tumbarello, says about the book:

[quote]Palle Schmidt is one of those visionary writer/artist combos you rarely see… His artistry and storytelling pull you into an intricate underworld that engulfs the senses and blurs the line between reality and fiction, making you feel like you’re there on a ride-along with our detectives as they desperately search for a cop-killer. Stiletto weaves a thrilling mystery that flips the entire crime genre on its head and keeps you guessing until the pulse-pounding conclusion.[/quote]

To read the full press release and download an 11-page sample, go to palleschmidt.com/STILETTO

Thanks for letting me tell (part) of this story. Hope you’ll give STILETTO a chance too.

Sometimes negative thinking is a good idea! Especially if you’re designing a very dark piece of art, focusing on the highlights rather than blacks can be useful.

In this little video I demonstrate how I transform a black piece of board into a cover for a novel (my own!).

Hey, if you want more drawing tips and other goodies, why not sign up for my free, non-spammy newsletter?

If you thought I was lying on a beach somewhere, you are thoroughly mistaken! Here’s part of what I’ve been up to this past year or so. Probably the busiest time of my life ever – and still is. Watch the video to find out why.