In art, two plus two doesn’t always equal four. Using the same method or the same pen as Stephen King will not make you Stephen King. You need to find out what works for you, by trying out a bunch of different ways.

Some people work within very strict boundaries – setting a timer or planning out everything in detail ahead of time. Others work more intuitively, making it up as they go along. As long as you get a result – and a result that you can be satisfied with – it matters less how you got there. But to make a living as a creative, you need to be able to repeat the process, so it might be a good idea to take a few mental notes along the way. Be conscious of what it is you do and how you spend your time, so you can make the most of it.

It frustrates me to no end seeing other artist just killing it, when their working methods are obviously flawed. I have to remind myself that we’re not all wired the same way and what works for me doesn’t necessarily work for them and vice versa. I interviewed a friend of mine who’s a very successful writer, after he got a three-year grant from the Danish Arts Council. I was cripplingly envious (can you imagine that? THREE YEARS of rent covered!) and decided I needed to figure out how he got to that place. During the podcast interview it came to light that my friend was envious of the colleagues who could sit down and write for more than four hours. I can personally write for ten hours straight, if the family will leave me alone. So as it turns out, we all have our own struggles and comparing makes little to no sense.

If you want to derail yourself by looking at people better than you and being envious of their success, go right ahead. There’s a free resource called Instagram that’s perfect for that activity.

It took me many years to accept my own method in writing. Everyone I talked to seemed to write chronologically, apparently that’s what you’re supposed to do. But when I tried this method I would always get stuck somewhere in chapter five or whenever I hit a point in the story I wasn’t able to figure out at that given moment. I completely gave up and walked away from a few books that way.

I later figured out that skipping ahead and writing something I can figure out, I’ll keep my momentum and avoid getting stuck. I’ll get an idea for a piece of dialogue while I’m trying to write a synopsis or get an idea for the end while I’m writing the beginning. Apparently I’m just too much of a scatterbrain to work from A to B to C – and that’s OK! As long as I get to the end. Today I’ll allow myself to jump around, thereby short-circuiting whatever is blocking my way. I don’t care if this is the right method or not, I’ve become very good at ignoring what other people think.

You have to try stuff and fail a lot before you find what works for you. Maybe you’re a night owl and that’s when you seem to create your best work. A musician I know consistently sleeps late, while his wife drops their son off at school. He hangs with the family all day and goes to the studio after he put his son to bed at night, working until the sun comes up. Others insist that the morning hours are the most productive.

Perhaps you like working with crayons while your colleagues use markers or watercolor. See if there’s anything in their tools or working methods you can learn from – then go do your own thing.

This post is an excerpt from my book SOLO – Survival Guide for Creative Freelancers available now in print, audio and ebook format.

SOLO is written for people who want a sustainable career, mixing freelance work with creating and selling their own art. My promise is that diving into the tactics and strategies of this book will help you set realistic, actionable goals and give you the tools to carve out your own creative career path.

Watch the video to find out what I value the most about my freelance life and download a 20-page sample of SOLO here: http://bit.ly/solo-book 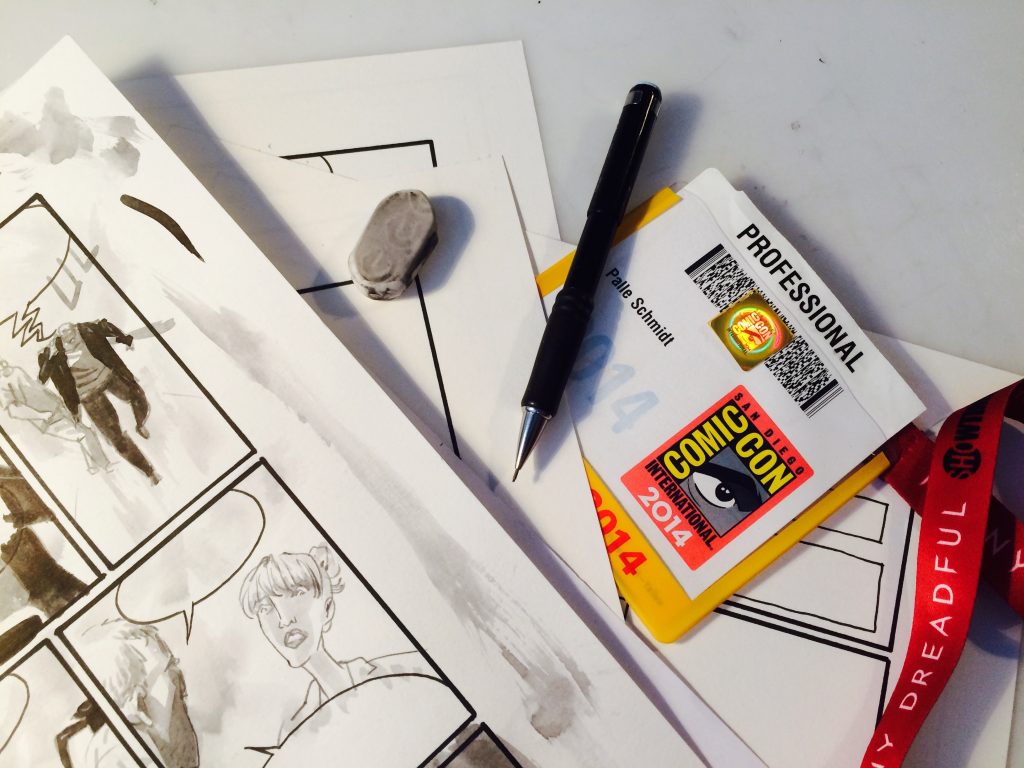 The obvious answer to what makes me a pro is of course that I make a living from my artistic skills and have been for almost 20 years. I’m also very good at keeping my promises (aka. deadlines) which I think is probably the most important thing for a freelancer.

But I just realized that underneath these superficial traits are two very basic principles:

I am aware of my own process enough that I am able to replicate it. That includes knowing how long each step will roughly take so I know what the time frame needs to be for me to deliver and also have an estimate of how much it should cost. This varies with each project depending very much on my own preferences. If it’s something I’m not passionate about, my price goes up. But that’s a whole other discussion.

I am aware of the resistance (as Steven Pressfield calls it) – both internal and external – that may (and probably will) come up along the way. My many years of experiencing the same feelings of self-doubt and boredom, helps me recognize it for what it is: A part of my workflow. It also helps me with strategies to deal with the resistance. Not overcome it, but live with it.

For instance, I will jump to another part of the process if I feel stuck or simply walk away from it for a while, knowing that I will get back in the groove tomorrow or the next day. What I don’t do is start doubting my entire career and self-worth because I have an unproductive day where I feel like I can’t draw to save my life.

There is no set-in-stone answer to how to become a great artist. Everyone is unique in their approach. But for me I believe the above points are crucial. Hopefully it can serve as an inspiration or eye opener for your own artistic process.

If you are looking for more practical advice on delivering the goods as a pro artist, try giving this podcast episode a listen.